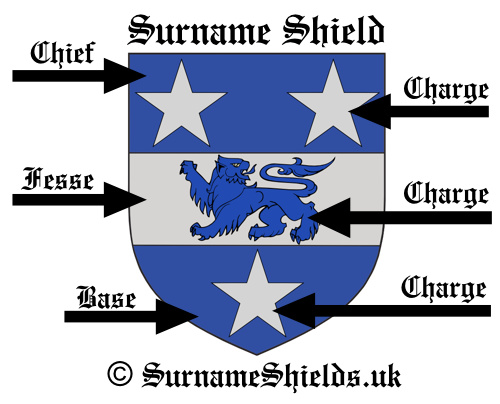 A family surname shield is also called an ‘escutcheon’ or ‘Arms’ and is the main component of a coat of arms, sometimes wrongly called a ‘family crest’.

Anciently, a shield was armour held on the arm or close to the body and was used to protect a soldier or warrior from arrows, spears and other weapons during battle. The word ‘shield’ derives from the Old English words ‘scild’ and ‘scildan’, both of Germanic origin. This word also appears as the Dutch and German word ‘schild’, meaning ‘divide’ or ‘separate’.

Shields contain separate areas as shown in the image here. These are:

The various images appearing on a shield are known as a ‘charge’ and can include many heraldic images such as ermine marks, stars (mullets), crescents, many different birds (eagles, hawks, falcons, martlets, storks, etc.) and animals including lions, leopards, stags, bears, boars, wolves, griffins, dragons & wyverns, etc.

Shields also appear with different layouts and colours. Layouts can be plain shields of one heraldic colour (see below) or they can be divided into two or more heraldic colours such as ‘divided per pale’ (two separate halves vertically), ‘per fesse’ (two separate halves horizontally), a plain shield with a chief of a different colour, a shield with a chevron, chevronels, fesse, bend (a diagonal band), and more.

Images appearing on surname shields may appear as one of the above colours or if the heraldic description (‘blazon’) specifies ‘proper’ it means its normal or natural colour. So a stork might appear as white, and a boar or bear would normally appear as black or brown.

The shield layout, images and colours are determined by the person who originally registered the coat of arms. Also, please note that coats of arms are registered or granted to an individual and not specifically a surname, but it is considered acceptable to display a shield, coat of arms or crest bearing the same surname as the recipient.

email
We use cookies on our website to give you the most relevant experience by remembering your preferences and repeat visits. By selecting "Accept", you consent to the use of the cookies shown in the "Cookie Settings" where you can provide a controlled consent.
Cookie SettingsAccept
Manage consent

This website uses cookies to improve your experience while you navigate through the website. Out of these, the cookies that are categorized as necessary are stored on your browser as they are essential for the working of basic functionalities of the website. We also use third-party cookies that help us analyze and understand how you use this website. These cookies will be stored in your browser only with your consent. You also have the option to opt-out of these cookies. But opting out of some of these cookies may affect your browsing experience.
Necessary Always Enabled
Necessary cookies are absolutely essential for the website to function properly. These cookies ensure basic functionalities and security features of the website, anonymously.
Functional
Functional cookies help to perform certain functionalities like sharing the content of the website on social media platforms, collect feedbacks, and other third-party features.
Performance
Performance cookies are used to understand and analyze the key performance indexes of the website which helps in delivering a better user experience for the visitors.
Others
Other uncategorized cookies are those that are being analyzed and have not been classified into a category as yet.
SAVE & ACCEPT